CSR Limited (ASX: CSR) (CSR) is engaged in the manufacture and supply of building products in Australia and New Zealand. The Company operates through building products, property and aluminum segments. Its building products include lightweight systems, insulation, inclose facades, bricks, and roofing. Its Property business unit is engaged in the sale of former operating sites by advancing the sites through various stages of the development cycle. In addition, this business is also involved in a small number of large-scale developments in New South Wales, Queensland and Victoria. The Aluminium business unit relates to its interest in Gove Aluminium Finance Limited, which in turn holds an interest in the Tomago aluminum smelter (Profile source: Reuters) 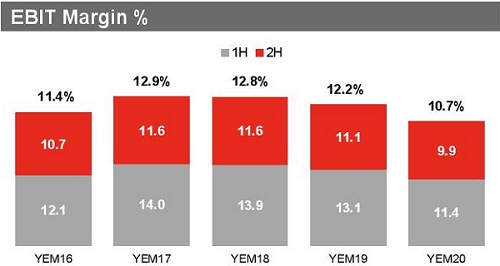 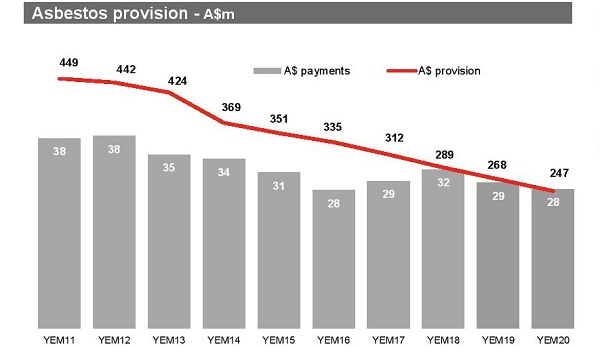 Building Products EBIT of $95.9 million was down 18% as the slowdown in residential construction activity impacted performance in the half. This decline in activity has seen housing commencements across the industry down on average 19%.

Despite the broader market slowdown, CSR’s largest businesses of Gyprock and Bradford delivered steady volumes and earnings as they benefitted from a diversified revenue base across residential and commercial sectors. However, Hebel and AFS earnings were lower as they have significant exposure to the high density market which was down 38% during the period. The higher fixed cost position in PGH impacted earnings in the first half but fixed costs have been reduced following the July 2019 closure of the Darra brick plant in Queensland.

In Aluminium, EBIT increased by 10% to $25.4 million as input costs stabilised. While no Property earnings were recorded during the period, significant progress was made on key development projects, which will secure strong Property earnings in future years.

The CSR Group delivered EBIT from continuing operations of $113.1 million (before significant items), 16% lower than the prior comparable period

CSR finished the period with a strong net cash position of $141.6 million. The board declared an interim dividend of 10.0 cents per share along with a special dividend of 4.0 cents per share (both franked to 50%). The special dividend takes into consideration the Company’s strong cash flow and financial position whilst delivering available franking credits to shareholders. The previously announced $100 million share buyback is ongoing with $47 million of shares purchased to date.

CSR also confirmed on 1 November 2019 the sale of the second tranche of surplus land at Horsley Park, NSW for total sale proceeds of approximately $140 million. The sale of the 20-hectare site is expected to generate Property EBIT of approximately $90 million. These earnings will be split into two 10-hectare stages which are expected to be recorded in the financial years 31 March 2021 and 2023 (YEM21 and YEM23).

CSR delivered a solid result in its Building Products business. It reported a net profit after tax of $125.3 million for the full year ended 31 March 2020, up from $78.0 million in the prior year which included impairment charges from the Viridian Glass business. In Aluminium, EBIT was up strongly as input costs have stabilised with the second half earnings benefitting from the significant decline in Australian dollar. As of 31 March 2020, CSR had net cash of $95 million and a strong liquidity position which ensured that it is well prepared for the year ahead. A key milestone was the completion of the $75 million new Hebel factory which was a long time in the making. CSR first began production of Hebel almost 30 years ago and today remains the only manufacturer of autoclaved aerated concrete (AAC) in Australia and New Zealand. CSR’s short term assets ($1.1B) exceed its short term liabilities ($480.9M) and also its long term liabilities ($798.1M). CSR has high quality earnings. Its earnings have grown by 0.2% per year over the past 5 years. CSR is a good value based on its PE Ratio (14X). CSR has a satisfactory (28,4%) debt to equity ratio. Its debt is well covered by operating cash flow (76.9%). CSR’s interest payments on its debt are well covered by EBIT (22.7X). Although it may retrace a little bit from here, the stock is ready for a crossover on long term charts. On the shorter t/f the stock has been making higher high and higher low since the market sell-off in March. Veye recommends a "Buy" on “CSR Limited” at the current price of $3.73