Yancoal Australia Ltd (ASX: YAL) is an Australia-based pure-play coal producer. The Company is engaged in the production of thermal and metallurgical coal for use in the power generation and steel industries in Asian markets. It holds ownership interests in, and operates, five coal mine complexes across New South Wales and Queensland, and manages five others across New South Wales, Queensland and Western Australia. Its interests in New South Wales include the Hunter Valley Operations (HVO), Mount Thorley and Warkworth open-cut mines (MTW), Moolarben coal complex (Moolarben) and the Stratford and Duralie mines (Stratford Duralie). Its mining interests in Queensland are located in the Bowen basin and include the Yarrabee mine (Yarrabee) and Middlemount mine (Middlemount). Its mining interests also include the Ashton, Austar, and Donaldson mines (Watagan Mines) in New South Wales. (Profile source: Reuters) 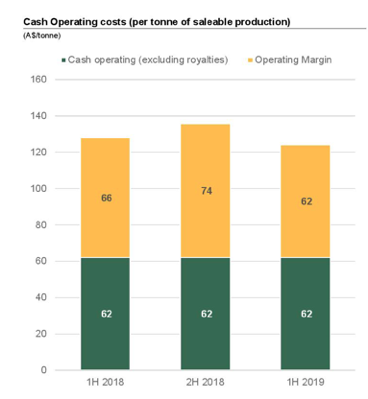 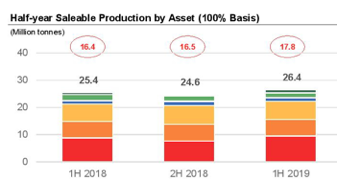 The Coal Resources and Coal Reserves statement presented in this report was produced in accordance with the Australasian Code for reporting of Mineral Resources and Ore Reserves 2012 Edition (the JORC Code). Commodity prices and exchange rates used to estimate the economic viability of Coal Reserves are based on the Yancoal long-term forecasts unless otherwise stated. The Coal Reserves tabulated are all held within existing, fully permitted mining leases, are within areas under applications to become mining leases or are within areas of exploration tenements detailed in the 2018 Life of Mine Plans to become mining leases in future applications.

On an attributable basis Yancoal’s group total year-end 31 December 2018 position is as follows:

During Q4 2019, attributable sales volumes (10.7Mt) exceeded the attributable production (9.4Mt), reducing the stockpile inventory. Yancoal purchased additional coal for blending, as is usual, to optimise the overall product mix and realised prices. Its production costs have been stable despite industry cost inflation. Yancoal is trading at 95% below its fair value. Its earnings grew by 74.7% over the past year. Yancoal is good value based on its PE ratio as compared to both its industry average and the Australian market. YAL has high-quality earnings. YAL’s current net profit margins are higher than last year. It has become profitable over the past 5 years, growing earnings by 70% per year. YAL’s earnings growth over the past year exceeds its 5 year average. YAL’s debt to equity ratio has reduced from 501.6% to 56% over the past 5 years. Its debt is well covered by operating cash flow (53.5%). With its low payout ratio of 32.2%, YAL’s dividend payments are well covered by earnings. Yancoal has been moving in a very narrow range. After falling in early January this year it has returned to its support level. Veye recommends a “Buy” on “Yancoal Australia Ltd” at the current price of $2.85 Rio Tinto Limited, potential for the development of multiple ore bodies within one system| 07 Aug 2020